The magic of the movies! Day of the Dead (or Day at the Desk) 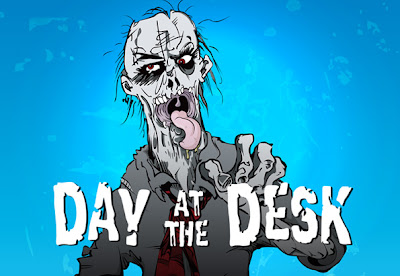 Another classic from Romero. I just love the first few minutes of this film. The opening scene is just fantastic. 80's pulsing synth music never sounded so good (So good in fact that Gorrilaz sampled it for the track A1-M1 on their debut album Video here).

That first shot of the zombie you see is fantastic! At first a stumbling shadow, then a blood dripping, jaw dropping (literally) visceral menace makes it's way forward. All done with traditional prosthetic visual effects. More zombies shuffling out of the doorways as they hear the cries of "Hello! Is anyone there?" is so creepy and effective.

The first five minutes are, for us, the highlight of the film and set an eerie tone, all filmed in broad daylight too. It's a shame that was about the best the film got, although production troubles - budgets and artistic vision -  marred the making of this film.

A remake? We've already had one and it was terrible, not to mention any weird semi prequels(!)… so, no thanks, let's keep it to the 80's. As for us Office Zombies, we already have a remake every week day - so, it's back to another Day at the Desk…

Email ThisBlogThis!Share to TwitterShare to FacebookShare to Pinterest
Labels: Office zombies remember, the magic of the movies, Zombies

Office Zombies
I work in the office